Who is Devin Haney’s Father? Net Worth, Career, and Other Facts About the American Boxer 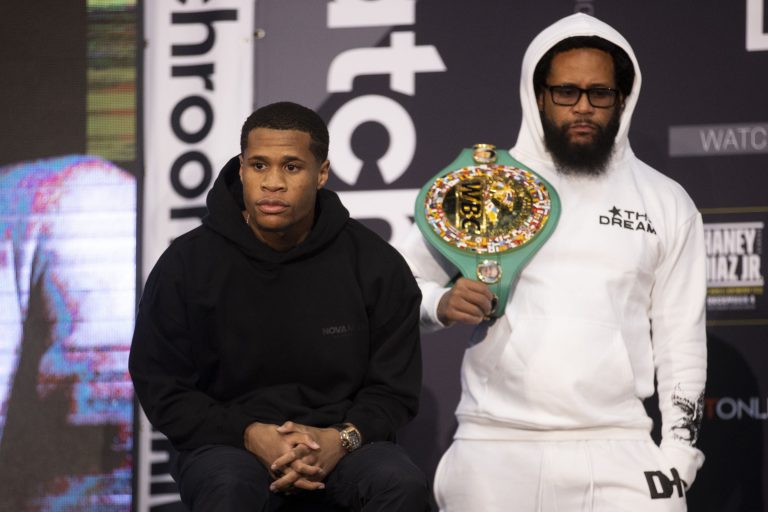 Devin Haney is an American professional boxer who fights in the lightweight class and has held the WBC lightweight title since 2019. The American, who is nicknamed The Dream, is trained by his father Bill Haney and the duo has enjoyed great success together. It is no surprise that The Ring magazine, Transnational Boxing Rankings Board, and BoxRec rank him as the fourth-best active lightweight fighter.

Haney began his pro boxing career in 2015 at the age of 17 and has remained undefeated since then. Now 28 years old, the boxer has amassed a fortune estimated to be around $6 million. Devin Haney has time on his side and will be looking to leave an indelible mark on the sport that has brought him fame and fortune.

Devin Haney was born on November 17, 1998, in San Francisco, California. He is the son of Bill Haney and April Clay. Devin’s parents were not married when they had their son. The two would eventually separate but were cordial with one another as they co-parented their boy.

Devin spent his early years in Oakland, California before moving to Las Vegas, Nevada with his father. It was here that Bill taught his son how to throw and defend punches.

Who is Devin Haney’s Father?

Devin Haney’s father is Bill Haney. As already stated, he is the one who introduced his son to the sport of boxing, guiding him to become the formidable force that he is today. Bill has been Devin’s trainer from day 1 and even though a few reports have said that they are no longer working together, the father-son duo is very much still in full swing.

Bill Haney has done a spectacular job in teaching his son the fundamentals of the sport that has guided him to a world championship. He is no doubt an excellent trainer and this has prompted questions about him once being a professional boxer. Devin Haney’s dad, however, never stepped into the ring in a professional capacity. He is only a boxing trainer and by the look of things, a very good one.

How Haney Made His $6 Million Net Worth

The bulk of Devin Haney’s fortune comes from his boxing career. He became a professional boxer at the young age of 17 and has so far fought in 27 bouts, winning all of them and becoming the WBC lightweight champion along the way.

Haney started his career outside the United States in Mexico because he was not up to the minimum age regulation. He fought his first four fights in Tijuana before returning to fight Rafael Vazquez at the MGM Grand Arena in Las Vegas in April 2016. His first title came a year later against Miximino Toala who he beat to win the vacant WBC Youth lightweight title.

Devin Haney has successfully defended the WBC lightweight title four times. He is slated to do so again on the 5th of June 2022 against George Kambosos who himself is undefeated and would be defending the WBA (Super), IBF, WBO, and The Ring lightweight titles.

He Has a Few Endorsement Deals

While a bulk of Haney’s income comes from what he earns from stepping into the ring, he has put pen to paper on a few deals that have bolstered his net worth of $6 million.

How Devin Haney Spends His Money

Being a very young man with a boatload of cash, Devin Haney splurges on some of the finer things of life that includes fast cars, expensive jewelry, and so on. In the garage of his Las Vegas home, you can find cars like the Lamborghini Urus, Rolls Royce Cullinan, Maybach Benz, and a Corvette.

Where is Rolando Romero From? Family, Career, and Net Worth of the Boxer