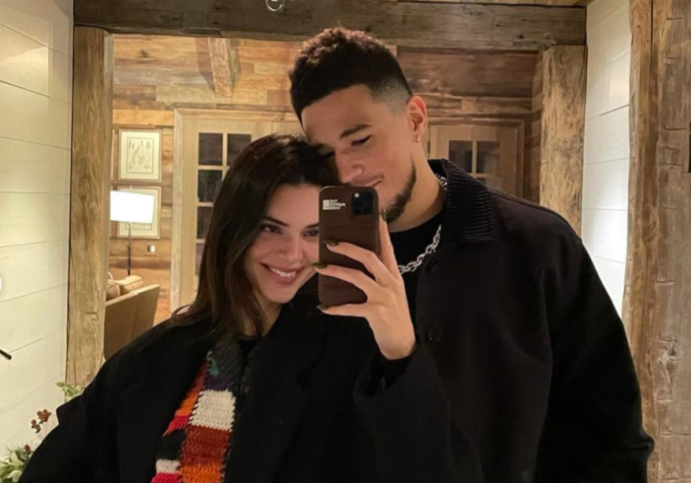 The Kardashian-Jenner family and the NBA have a long history together. Since the very famous union between Khloe Kardashian and Lamar Odom, members of both groups have been linked to each other with each passing year. The latest to feature in the headlines is Kendall Jenner and Devin Booker.

Both Kendall and Devin have enjoyed success in their individual careers. As a result, it does not surprise many people that their relationship has become the talk of the town. It further did not help that it also started in a messy way, however, they appear to be growing strong, as many fans predict that an engagement might well be on the way.

Kendall is a supermodel who rose to fame by appearing in the Keeping Up with the Kardashians reality television show. By the time she turned 14, she had begun modeling, signing to Wilhelmina Models. She would go on to appear in various commercial print ad campaigns and feature in magazines like Teen Vogue, Teen Prom, American Cheerleader, Flavour Magazine, etc.

In late 2013, Jenner switched to high fashion modeling and so signed with The Society Management. She would go on to have a breakout year in 2014 as she was subsequently able to book jobs with high-fashion designers like Fendi, Marc Jacobs, Givenchy, Chanel, Donna Karan, Dolce & Gabbana, Giles Deacon, Tommy Hilfiger, Bottega Veneta, Pucci, and Balmain, walking the runways in New York, Milan, and Paris fashion weeks.

Kendall Jenner continued to climb the fashion world ladder in the following years and so was listed by Forbes in 2015 as one of the highest-paid models in the world. It was estimated that she earned around $4 million. By 2017, Kendall had become so much of a sensation that she was able to outplace Gisele Bundchen as the world’s highest-paid model. Gisele had held that position since 2002. Kendall held that position in 2018 as Forbes reported that she made $22.5 million that year.

While Kendall Jenner appears to be doing big things in the fashion world, Devin Booker is holding his own in the NBA. The 6 foot 5-inch tall shooting guard for the Phoenix Suns is a rising star. He has two NBA All-Star selections and is noted for being the youngest player to score over 60 points in a game.

In 2021, he was one of the driving forces that helped his team make the NBA Finals for the first time in almost three decades. While the Suns would go on to lose to the Milwaukee Bucks, he distinguished himself by becoming the third player in NBA history to have back-to-back 40 point games in the Finals.

The son of former basketball player Melvin Booker, Devin Booker played one year of college basketball before entering the NBA. He played one season for the Kentucky Wildcats before he made himself available for the 2015 NBA draft and was selected 13th overall. Booker would go on to make his debut in the NBA at 18 years of age, becoming the first player in NBA history to do so after one year of college basketball. He had a stellar rookie year but fell short of winning the Rookie of the Year award, finishing fourth in the voting. He, however, earned NBA All-Rookie First Team honors.

As the years went by, Devin Booker looked at home in the NBA as he set or equaled various records in the game. In July 2018, in the last year of his rookie-scale contract, the Suns rewarded him with a five-year, $158 million maximum contract extension. This puts his average take home just above $31 million. Add that to what he makes from endorsements, about $6 million a year from deals with Nike and Finish Line, and you can see why he and Kendall are regarded as a power couple.

During the height of the covid-19 pandemic, Booker and Jenner were photographed on a road trip from Los Angeles to Arizona. In May 2020, while gossip blogs were reporting that their relationship was platonic as Jenner had been linked to several other men, they were seen driving near Van Nuys Airport in L.A. The pair would continue to be pictured together out and about with several mutual friends over the next couple of months, prompting more and more speculations about their relationship.

One incident that particularly fed the rumor mill was when the two were photographed showing PDA on the beach. Booker took things to another level when he commented on one of her Instagram posts. Jenner shared a video of herself posing for the camera and captioned it with a strawberry emoji. The NBA player went on the post and left a comment that read, “I like strawberries.” Jenner responded to the comment with four strawberry emojis.

While all the flirting was going on, the model received criticism for dating NBA players. She waved them off by saying she could do whatever she wanted. She had in the past been linked to former Los Angeles Clippers player Blake Griffin and Philadelphia 76ers player Ben Simmons.

Kendall Jenner and Devin Booker continued to tease their relationship for many months before getting Instagram official. In what was considered a very rare thing to do by the model, she shared the first photo of them together to her Instagram Story with a white heart emoji caption. This was the confirmation that everybody needed to know that the pair were an item.

Things subsequently became very serious for the pair as it was noted that they had become exclusive. She would continue to share images of Booker to her Instagram story over the next couple of months. Kendall even took time out of her very busy schedule to attend his games. In June 2021, they both shared pictures that marked one year of dating. Ever since then, it has been public knowledge that the pair are very much an item.

Lauren Wood Is Odell Beckham Jr.’s Current Girlfriend But Who Else Has He Dated