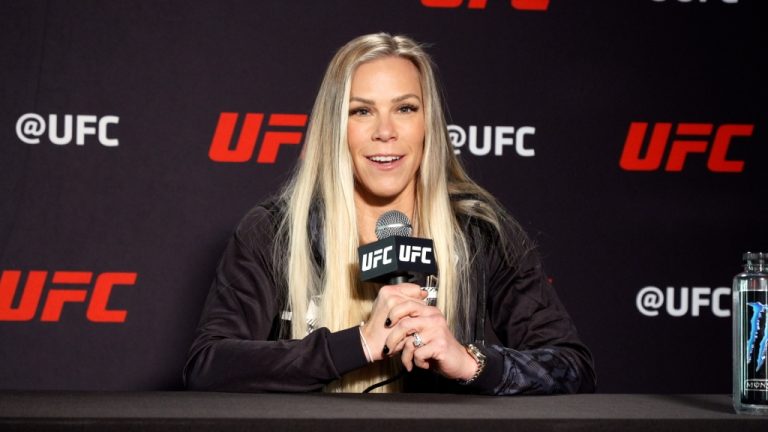 Considered to be one of the best female flyweight and bantamweight fighters to grace the octagon, Katlyn Chookagian is currently ranked 2nd in the UFC women’s flyweight rankings and number 10 in the UFC women’s pound-for-pound rankings; she is the real deal. Katlyn began her training (karate) when she was 4 years old and practiced kickboxing and boxing when she was in high school. She started fighting as an amateur in 2012 and became a pro fighter in 2014.

Born on the 28th of December 1988 in Quakertown, Pennsylvania, USA, Katlyn had what many would describe as a normal childhood. She attended Quakertown Community Senior High School before enrolling at Fairleigh Dickinson University where she completed the requirements to be awarded a Bachelor’s degree in Business Management and Marketing.

As a student and before the time she ventured into martial arts, Chookagian had a job serving pizzas at Q-mart. She notably set a record there; the most slices of pizza fit into her pocket.

Her Fighting Career Began In June 2014

Standing at 5 feet 9 inches and weighing 57 kg with a fighting style of boxing not to mention she has experience in kickboxing and karate, Katlyn is not one to mess with and her record speaks for itself.

The Mixed Martial Artist is presently in the Bantamweight classification for the Ultimate Fighting Championship (UFC). She made her MMA debut on the 25th of June 2014 against Rebecca Heintzman at CFFC 37. She won convincingly via a unanimous decision. The Pennsylvania native would go on to fight in the CFFC for a few years before making her UFC debut on the 23rd of July 2016. Her debut fight was against Lauren Murphy and she emerged victorious via unanimous decision.

Will Katlyn Be Returning To The UFC?

When asked about the situation, UFC president Dana White said it wasn’t up to him. He noted that things might change in the future but he can’t make any decision right now. It’s important to note that Katlyn Chookagian and heavyweight champion Francis Ngannou have the same management so the stand-off is one to keep an eye on.

What Is Katlyn Chookagian’s Net Worth?

Chookagian has earned over $930,500 in her career. From her tremendous fight with Viviane Araujo at UFC 262, she reportedly took home around $151,000. While most of her other earnings are not public knowledge, it has been estimated that she is worth around $600,000.

In addition to what she earns from fighting/UFC, Katlyn also makes some money from endorsement deals. The Blonde Fighter has approved many brands throughout her career. The list of the brands she has been affiliated with includes NutraBio, Batiste USA, Fight Chix, and also Everlast.

Kaitlyn Chookagian is not the only fighter in her home as she is happily married to mixed martial artist Kyle Cerminara. Kyle, who is also a freestyle wrestler, is a native of Lewiston, New York. He attended the University at Buffalo where he began fighting. During his time at the school, he was notably named UB’s Male Athlete of the Year twice. He was also an NCAA All-American and a New York State Champion.

After school, Kyle turned pro but he only managed to have a career that lasted three fights. For unknown reasons, Kyle stopped fighting in 2012 with an excellent record of 3-0. He has since taken up an assistant coaching job at the University of Pennsylvania while also serving as a wrestling coach at Long Island MMA.

The couple appears to not have any children yet. They are evidently happy together as Katlyn doesn’t hold back from telling the world about how she feels about him.

What is Dan Henderson’s Net Worth and Who is His Wife Rachel Malter?