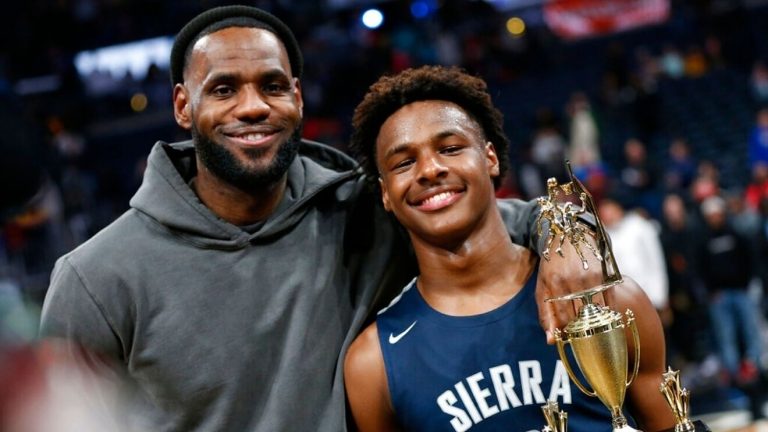 While many agree that Bronny James is not the best among his peers, he still garners more attention than some NBA players. This, however, should not come as a surprise if you know that his dad is one of the greatest basketball players of all time, LeBron James. Bronny has been in the spotlight ever since he was a kid as he often attended his father’s games. He has since grown into a player of his own hoping to one day follow in his father’s footsteps to play in the NBA.

Currently a high school student, Bronny plays for Sierra Canyon School. The 17-year-old has captured the attention of scouts, fans, and the entire basketball world with his unique and somewhat diverse style and position of play. It is only a matter of time before we get to see Bronny in the pros but is he good enough to make it yet These and many more issues are discussed below.

Bronny James Is Tall Enough To Play In The NBA

Bronny James stands at 6 feet 3 inches (1.91 m). While the average height of an NBA player is 6 feet 6 inches (1.98 m), there are many NBA players today who are excelling in the sport at his height. At age 13, Bronny’s dad was 6 feet tall. He entered high school at 6 feet 4 inches and grew to 6 feet 6 inches as a sophomore. Bronny is yet to catch up to the height of his father but he stands in the same height range as his idol Rusell Westbrook (1.91 m), Steph Curry (1.88 m), and many others.

Russell Westbrook III is an American professional basketball player for the Los Angeles Lakers of the NBA. He is a part of the NBA 75th Anniversary Team, a nine-time NBA All-Star who earned the NBA Most Valuable Player Award for the 2016–17 season. He is a big source of motivation and inspiration to Bronny James, that’s the reason for his jersey number “0”.

Currently, Russell is 6 feet 3 inches although when he was in high school his registered height was 5 feet 8 inches, more than six inches shorter than Bronny.

Zaire Wade is the oldest son of former professional NBA star Dwayne Wade. He is on his way to making it into the NBA so Bronny would be looking to follow in his footsteps. Zaire currently plays for the Salt Lake City Stars of the NBA G League.

Born on the 4th of February 2002 in Chicago Illinois, Zaire formerly played basketball for Sierra Canyon High School in California. At the school, he was teammates with Lebron James’s son Bronny. After injuring his ankle during his senior year, Zaire announced his plans to transfer to Brewster Academy in New Hampshire to complete a postgraduate year before heading to college. Zaire Wade stands at 6 feet 3 inches which is the same as Bronny’s height.

Ziaire Williams is an American professional basketball player for the Memphis Grizzlies of the NBA. He played college basketball for the Stanford Cardinal. He is an alumnus of Sierra Canyon (Bronny’s school). Zaire stands at 6 feet 8 inches (5 inches taller than Bronny).

LeBron’s Son’s Prospects Of Playing In The League

Back in 2015, CBS Detroit’s Mike Sullivan reported on LeBron James and his thoughts on his son, Bronny James, receiving college offers. James said at the time that his son can play both the point guard and shooting guard positions. He has a “slick shooting stroke” and is a talented ball-handler and passer. Scouts have further applauded his “feel for the game” and composure on the basketball court.

It was in 2014 when a basketball highlight reel arose demonstrating Bronny James’ phenomenal skills at age 9. Being the son of LeBron James only enabled the video to get national attention, leading to pundits spending hours talking about his potential as a player.

Regardless of the complications of earning fame at Sierra Canyon, Bronny is making an impact. He’s made pivotal plays and enhanced his playing time. After a short, slight altercation over being recorded smoking marijuana, he strode away from the spotlight to concentrate on his game. His jump shot is already ahead of LeBron’s curve at the same age, as is his overall mental game.

As LeBron James moves through the latter portion of his career, the spotlight has been propelled more on his son’s basketball future. Bronny is in his junior year of high school, with expectations to continue his journey through to the professional ranks. With that potential likelihood floating around ahead, LeBron recently implied again that he is hoping to play on an NBA court together against his son.

“I want him to get to the NBA,” James said. “I’m not even gonna lie. I want to be on the court with him. I think that would be an unbelievable moment.”

Bronny James is lined up to be part of the 2023 high school class. He’s already gaining interest from Duke, UCLA, North Carolina, and Kansas. Kentucky is the only school so far to offer him a scholarship. At this point, he must spend at least one year after high school before diving into the NBA.

What Year Will Bronny James Be Drafted?

As earlier mentioned, LeBron James’s son is in the 11th grade, the junior year of high school. When he was nine years old, then-Ohio State coach Thad Matta joked that he needed to offer him a scholarship. By 2015, James had already received basketball scholarship offers from colleges, although the particular names were not disclosed.  As of 2021, his 247Sports.com recruiting profile lists his schools of interest as Kentucky, Duke, Kansas, North Carolina, and UCLA, with Kentucky being the only school that has made a scholarship offer.

Bronny has worn the number 0 jersey as motivation from his favorite NBA player, Russell Westbrook. Passing into eighth grade, he swapped to a number 23 jersey in respect of his father’s number. He is now 17 years old, a year younger than his father was when he was drafted into the NBA in 2003. We don’t have to wait too long before seeing James Jr. in action. Bronny received college scholarship offers at the age of 10 so receiving one now shouldn’t be an issue for the high school player. However, it is expected that he should be drafted in 2024.

Share. Facebook Twitter Pinterest LinkedIn Tumblr Email
Previous ArticleKatlyn Chookagian Bio: Facts About Her Husband, Net Worth, and UFC Career
Next Article Who Is Cooper Kupp’s Wife Anna Croskrey and How Old Is She?

Interesting Facts About Dyson Daniels, His Family, and Basketball Career

Who is Jabari Smith Jr.’s Dad? Family, Career, Height, and Other Facts