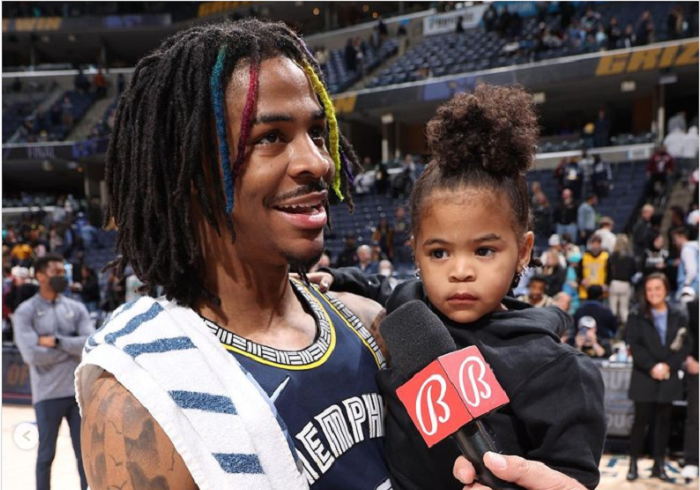 Kaari Jaidyn Morant is an American kid who has received attention from the general public, particularly NBA fans, for being the daughter of NBA star Ja Morant.

While her father, the 2020 NBA Rookie of the Year, is an outstanding and popular basketball player who has made a name through the contributions he makes to his team, the Memphis Grizzlies, not many people are familiar with his ex-partner and Kaari’s mother, KK Dixon. She is, however, popular in her own right as a social media personality with thousands of followers on her social media pages.

Kaari Jaidyn Morant was Born in 2019

Kaari Jaidyn Morant was born on the 7th of August 2019, making her 3 years of age as of 2022. She is the daughter of basketball player Ja Morant and social media personality KK Dixon.

Kaari was born two months earlier than expected. This meant that she had to stay in the hospital for some weeks before she was was allowed to go home. Other than this information about her birth, not much is known about her early life, including where she was born. It is, however, known that she has been mostly raised by her mother ever since her parents broke up.

Kaari’s Parents Separated After She was Born

Ja Morant and KK Dixon started dating before he got into the NBA. Ja played high school basketball for Crestwood High school in Sumter, South Carolina before enrolling at Murray State where he played college basketball from 2017 to 2019. In 2019, he was drafted with the 2nd overall pick by the Tennesse, Memphis-based NBA franchise, Grizzles.

The couple’s relationship started in 2018 and Dixon confirmed it to the public when she posted a picture of them together. A year after they started dating, the duo gave birth to their daughter Kaari Jaidyn Morant in August 2019. Unfortunately, the couple also broke up in 2019. The public got to know about it on Instagram when it was learned that they unfollowed each other.

No details were given for the reason behind their breakup but they have remained great co-parents to their daughter.

Kaari Jaidyn Morant’s mother KK Dixon is a social media personality with thousands of followers on Instagram. She is a native of Arkansas who was born in the year 2000. Her parents have been discovered to be DeShannon and Christal Dixon and she has a younger sister named Braylee Dixon and a brother named Tyrik Dixon. Tyrik, like KK’s boyfriend, plays basketball. He currently plays for the Missouri State Bears.

Other than her social media career, KK Dixon appears to have an interest in philanthropy. She helps raise money for preeclampsia research.

Does Kaari Jaidyn Morant Have Siblings?

Kaari Jaidyn does not have any biological siblings; she is the only child of her parents. She however has lots of cousins whom she frequently spends time with and posts on social media. This is why many believe she might have a sibling.

Is Kaari on Social Media?

Kaari Jaidyn Morant has an Instagram account that is operated by her parents. The account under the username @kaarimorant is full of pictures of her from over the years. Some are with her daddy and mummy while others are with her best friend, a boy named Kree.

Kaari has so far amassed over 80 thousand followers thanks to the influence of her parents, particularly her superstar father who has over 6.8 million followers on the picture-sharing platform.