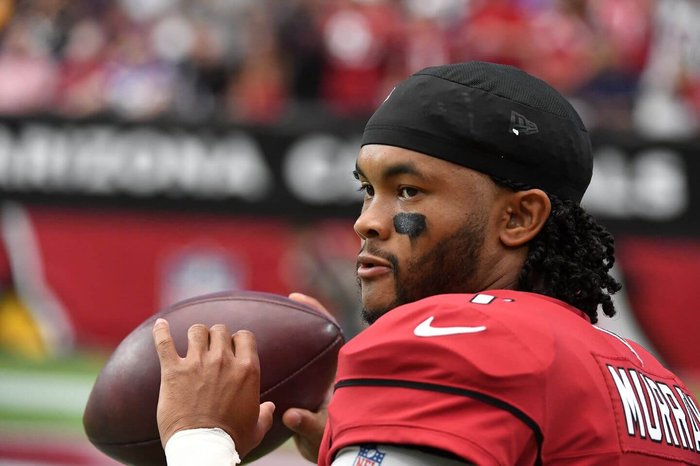 If there is one player who has been negatively judged due to his height but has had his stats speak for him in the NFL, it is Kyler Murray. Prior to his professional career, many believed he won’t enjoy success because of his limited stature. The quarterback is only 5 feet 10 inches tall. Analysts and other sports commentators opined that he was better off opting for a baseball career since he also played the sport and was quite good at it. Murray was considered one of the top prospects for the 2015 Major League Baseball draft out of high school and the Oakland Athletics selected him with the ninth overall selection of the 2018 MLB draft. Murray certainly had a career waiting for him in baseball but he opted to prove people wrong and play football.

Playing the quarterback position, Murray has set records everywhere he has played. His exploits in college that allowed him to take home the Heisman Trophy in 2018 ensured that he was selected first overall in the 2019 NFL draft. The Texas native has since looked right at home in the big leagues, and many expect that he would have a big impact in the league before his career comes to an end.

Why Kyler Murray’s Height Was A Concern To Scouts

As a college student, Kyler Murray’s height was listed at 5 feet 10 inches. This, however, was thought to be exaggerated as university programs had a history of propping up the body measurements of their players in order for them to look attractive to professional teams. Many analysts believed Kyler would be too small to play in the quarterback position as the average height of NFL quarterbacks was 6 feet 3 inches.

When the athlete attended the NFL Combine prior to the draft in 2019, he shocked many scouts as his height was recorded at 5 feet 10 1/8 inches. He further had a bodyweight of 207 pounds which meant he had the same measurements as Super Bowl-winning Seattle Seahawks quarterback Russell Wilson. With the greater-than-expected body measurements he recorded, Murray’s draft stock improved. He was subsequently drafted first overall by the Arizona Cardinals, becoming the first quarterback under 6 feet to be selected number one in an NFL draft and the shortest quarterback drafted in the first round. Wilson, who is the same height as him, was selected in the third round (75th overall) while Johnny Manziel, who is 5 feet 11 3/4 inches tall, was a first-round pick but was selected 22nd overall.

Details of Kyler Murray’s Contract and Net Worth

After Kyler Murray was drafted into the NFL by the Cardinals, he put pen to paper on his first professional contract on May 9, 2019. The deal was a four-year rookie contract worth $35.2 million. He further received a signing bonus of just over $23 million. Per the terms of his contract, Murray earns an average annual salary of around $8 million.

After crunching the numbers, different wealth calculating websites have estimated that Kyler Murray’s net worth has reached the height of $20 million in just over three years as a professional athlete. That figure will certainly be on its way up as the athlete who has many Cardinals franchise records to his name, including one for most games started by a rookie quarterback, is eligible for a contract extension.

Under the Collective Bargaining Agreement, rookies cannot get a contract extension until the day after their third regular season ends. But with Kyler being under contract through 2022, the Cardinals have the option of picking up the team (fifth year) option for 2023 if they decide not to offer him a contract extension yet. With this option, it’ll be worth $28.58M (bumped up almost $3 million because of his two Pro Bowl selections in his first three years.)

Overview of His Performances Through The Years and Stats Recorded

Kyler Murray’s height was not an issue when he attended Allen High School and played for the school’s football team. He was outstanding at the time, guiding them to 43 wins in a row and three straight state championships. After being named Gatorade Football Player of the Year in his senior year, ESPN, Scout.com, and other notable sports publications ranked him a five-star recruit and the best dual-threat quarterback in his class. When the time came for the future pro football player to commit to a university program, he choose to attend the same school his father played as a quarterback in the 80s, Texas A&M University.

Murray didn’t get off to a flying start at college as he had to compete for the starting position. While he failed to win the job at first, he later got a chance to impress his coaches and he sure did by becoming one of only two quarterbacks in the past two decades in the Southeastern Conference to gain over 100 yards passing and rushing, including a passing touchdown and a rushing touchdown, in their first career start. This record-breaking performance did not continue and so the athlete was made a backup again, prompting him to transfer to the University of Oklahoma.

At Oklahoma, Murray had to settle for a backup quarterback role to Baker Mayfield. By the time Mayfield left for the NFL, he became starting quarterback and impressed everyone. Murray led his team to a Big 12 Championship win and an appearance in the College Football Playoff. His performances earned him the Heisman Trophy as the best collegiate football player in the country.

Now in the NFL, Kyler Murray was named a starter. He impressed his coaches and analysts by living up to his draft selection as he finished his rookie season with 3,722 passing yards, 20 passing touchdowns, and 12 interceptions with 544 rushing yards and four rushing touchdowns on 93 carries. This earned him a Pro Bowl Alternate selection and the AP NFL Offensive Rookie of the Year Award. The quarterback’s performances haven’t wavered ever since and in 2021 he is set to make his first NFL playoff appearance.