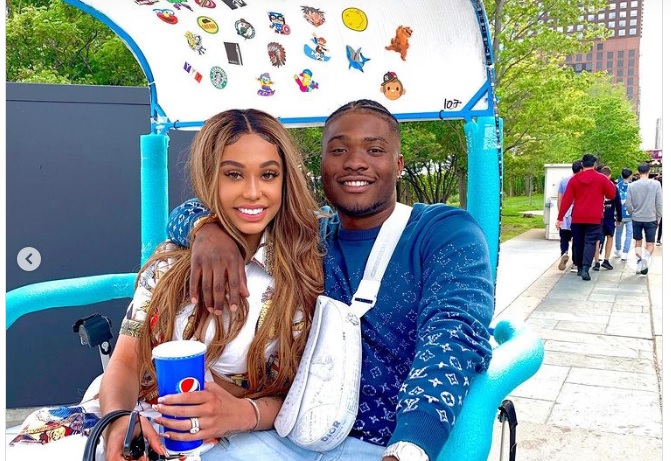 Kalabrya Gondrezick is an American former college basketball star turned medical aesthetician and cosmetic laser technician. She is however better known for being the wife of late NFL quarterback Dwayne Haskins who passed away on April 9, 2022, after he was struck by a dump truck while trying to cross a highway near Fort Lauderdale, Florida.

Kalabrya and her husband made the headlines for the wrong reasons in the past. The duo got into a fight during a trip to Las Vegas and Haskins had his tooth knocked out by his wife. While Kalabrya was subsequently arrested over the incident, all that appears to be a thing of the past as she now has to live with the fact that her partner is no longer here.

Kalabrya Gondrezick was born on 18 December 1995 in Benton Harbor, Michigan, United States. She is an American national of mixed ethnicity as her father Grant Gondrezick was a white man while her mother Lisa Harvey is a black woman. Kalabrya has two siblings; Kysre and Grant Jr.

The young lady was raised to love basketball as her father, mother, and uncle all played the game professionally. Grant Gondrezick played at Pepperdine University before getting drafted into the NBA with the 77th pick. He would go on to play for the Phoenix Suns and Los Angeles Clippers before his addiction to cocaine almost ruined his career. While Grant was unable to play in the NBA again, he played in the minor leagues and in Europe before retiring. He passed away in January 2021 at the age of 57.

Kalabrya’s mom, Lisa Harvey-Gondrezick, was a notable college basketball player. She was a star at Louisiana Tech, playing a key role in her team winning a national championship. After graduating, she played professionally in Italy before later becoming a coach. Her most high-profile coaching role was as the assistant coach at her daughter’s high school, Benton Harbor.

The other family member to play basketball professionally was Kalabrya’s uncle, Glen Gondrezick. He played college basketball for the University of Nevada, Las Vegas before getting drafted by the New York Knicks in 1977 with the 26th pick. He would go on to play in the NBA for six seasons before returning in 1984. Glen died in 2009 at the age of 53 due to heart failure.

She Played Basketball in College Before Attending Beauty Schools

Kalabrya Gondrezick attended Benton Harbor High School in Benton Harbor, Michigan where she began playing basketball. She was a standout player alongside her sister in high school before going on to play college basketball at Michigan State University. Kalabrya didn’t quite have the same career as her sister who went on to play at the University of Michigan and West Virginia University before becoming the 4th pick by the Indiana Fever in the 2021 WNBA draft.

After graduating from Michigan State, Kalabrya enrolled at the National Laser Institute and the Douglas J Aveda Institute where she pursued accreditations for a beautician career.

On March 19, 2021, a few years after she graduated from college, Kalabrya Gondrezick married Dwayne Haskins Jr., an American football player who played as a quarterback in the NFL for three seasons before passing away. The pair are believed to have met in 2019, dating for about two years before tying the knot.

Haskins made a name in college playing at Ohio State. He set a couple of records and won the Sammy Baugh Trophy and Kellen Moore Award before entering the league in 2019. He was drafted by the Washington Redskins with the 15th overall pick. He spent two seasons with the Redskins before signing for the Pittsburgh Steelers in 2021. He served as the backup quarterback on the team until his demise in 2022.

Gondrezick was Arrested in 2021 For Assaulting Her Husband

Months after Kalabrya Gondrezick married Dwayne Haskins, the pair got into a fight that made the headlines. During a trip to Vegas in July 2021, Gondrezick was arrested for assaulting her husband. She allegedly knocked out Haskins’ tooth and split his upper lip during the fight that started over an argument about Haskins going to a nightclub with friends and leaving her behind.

As a result of the incident, she faced a felony charge of battery and domestic violence resulting in bodily harm.