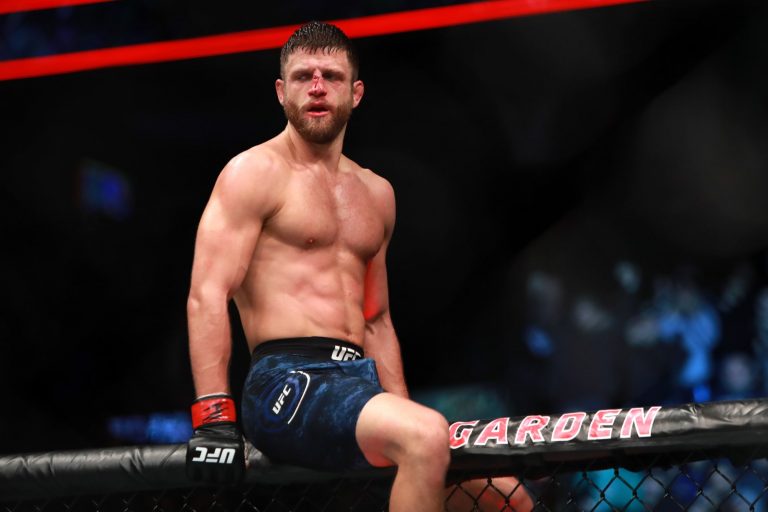 Calvin Kattar is a well-known and respected MMA fighter who currently competes in the featherweight division for the Ultimate Fighting Championship (UFC). Fighting since 2007, he used to fight for EliteXC and as of the 26th of April 2021, he ranked 5th in the UFC featherweight rankings.

Standing at 5 feet 11 inches tall, he weighs 66 kg and his fighting style is boxing, not forgetting that he is also a blue belt holder in Brazilian Jiu-Jitsu. His MMA record is:

In his latest fight against Giga Chikadze, Kattar exhibited what it meant to get back up after being down. He showed resilience and strength when he stunned the judges in the five-round bout. Calvin won unanimously with judges scoring 50-45, 50-45, and 50-44 in favor of him. However, the storyline doesn’t really say it all. Calvin’s opposition gave a good fight, throwing kicks and jabs at him but sheer will and experience played out with the American almost pinning Giga to a submission.

Below are a few things you should know about the American martial artist as he is not just a flash in the pan.

1. He Trained with The Diaz Brothers

Growing up, Calvin Kattar was a wrestler that had so much promise. Did you know he ranked eighth in the state? However, not certain if he was going to make a career out of it, he developed an interest in Mixed Martial arts as his discipline was not too different.

Kattar, who has an Associate’s Degree from Middlesex Community College, later got a shot to train with the distinguished Diaz brothers when he was just 19 years old. Watching them train influenced his way of training. “I got like three bloody noses a day. I’m out there dogging it out. I’m by myself. But it was a great opportunity. Long term, I was able to see these guys and how they train on the West Coast. Watching the Diaz brothers train at 1 a.m. and realizing you can lie to yourself and say guys aren’t training like that, but somewhere they are. I was exposed to that, which is great,”.

Nick and Nate Diaz are two legends of MMA. Remembering the experience of training with them at a young age gave Kattar enormous enthusiasm to build his career.

2. His UFC Debut Came After Another Fighter Dropped Out

Despite his commendations in regional circuits, Kattar was relatively unfamiliar to MMA fans. He wasn’t called by the UFC until Doo-Ho-Choi had to retire from his bout against Andre Fili at UFC 214. ‘The Boston Finisher’ was brought in to make Fili stay on the card and boost his stocks.

Rather, Kattar made the best of this chance. He exhibited his insane boxing mastery and won every round against the brilliant Fili. He went from a relatively foreign fighter to every fan’s favorite with just one performance. Following a sensational stoppage win over the division’s dark horse, Shane Burgos, Katter became an instant fan favorite.

3. He Enjoyed An 8-year Unbeaten Streak

Kattar commenced his winning run in 2010 in regional circuits. He enrolled in the UFC in 2017 when he fought Andre Fili at UFC 214. He went on to win his first two UFC fights. Thereafter, he lost his fight to Renato Carneiro by unanimous decision. It was his first professional loss in over 8 years.

Calvin Kattar was scheduled to feature at UFC’s Boston card in his hometown against Dagestani candidate Zabit Magomedsharipov. But things took an unexpected turn to the opposite. The fight got rescheduled to Moscow on Magomedsharipov’s home soil. It was a career-breaking contest for the Boston fighter.

Although Kattar lost the fight by decision, he exhibited late flickers of his intellect. Also, things were turning around in his favor despite a vital start for Magomedsharipov. Had it been a five-round fight, the result would have been very distinct as the Russian was exhausted by the 3rd round. Nonetheless, Kattar has managed to win consecutive fights since.

5. He Headlined His First-Ever Fight In Fight Island In 2020

Fight Island was one of the best creations of 2020 by the UFC. The company came up with it as a “safe zone” for fighters during events. This happened during the Coronavirus pandemic. Kattar got the opportunity to feature in what would be his first five-round headline fight in the UFC. Against a formidable adversary in Dan Ige, Kattar exhibited his outstanding boxing skills. He went on to win a judgment in the first-ever Fight Island Fight Night card.

6. Kattar Earns A Quarter Of A Million After Every Fight

While Calvin Kattar’s finances are generally a mystery to the public, it has been estimated that he is worth between $1-5 million. For his salary, the UFC fighter is believed to take home $250,000 as base pay from every fight. He further gets paid $10,000 from sponsorship, bringing his total salary to $260,000. Note that the total salary might change depending on the win bonus and performance bonus. The win bonus and performance are added after the event is finished.

7. Calvin Kattar Does Not Seem To Be Dating

Calvin is presently single and not dating anybody (at least from what our sources have been able to gather). There isn’t a lot online about his personal life and relationship history as he doesn’t say much about that on his social media page.

In regard to his family, we know he has three siblings; Keegan, Kylee, and Jamison. He seems to always find time to relax with his family.

featured
Share. Facebook Twitter Pinterest LinkedIn Tumblr Email
Previous ArticleLauren Wood Is Odell Beckham Jr.’s Current Girlfriend But Who Else Has He Dated
Next Article The Highest Paid NFL Players (Quarterbacks and Non-Quarterbacks) and Their Salaries